Wangdue Phodrang Dzong Temple in the Kingdom of Bhutan was totally destroyed by a fire in June 2012.

A historical temple constructed 374 years ago in 1638, Wangdue Phodrang Dzong had only just applied for registration as World Heritage in March.

King Wangchuck of Bhutan and his wife visited Fukushima Prefecture to give words of encouragement to citizens amidst the devastation caused by the Great East Japan Earthquake and the radiation problems caused by the accident at Fukushima Daiichi Nuclear Power Plant.

As a token of our gratitude for that gesture and demonstration of our concern, we made a monetary contribution.
In Fukushima Prefecture, children of Soma Municipal Sakuragaoka Elementary School, which was visited by King Wangchuck and his wife, have conducted voluntary fund raising activities. We hope that the circle of numerous such support activities will spread far and wide from now on. 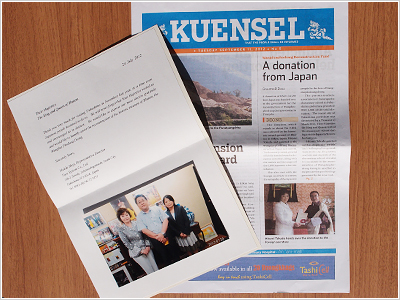