Participation in the Tohoku Renaissance “WA” Festival in Paris

Over two days on August 30 and 31, 2014, the Tohoku Renaissance “WA” Festival in Paris, an event appealing for assistance for the reconstruction effort following the Great East Japan Earthquake, was staged at Champ-de-Mars park at the foot of the Eiffel Tower in Paris, France.
The Tohoku Fukkosai event was the culmination of the OECD Tohoku School educational support project for recovery that has been hosted by Fukushima University in cooperation with MEXT (Ministry of Education, Culture, Sports, Science and Technology), and OECD (Organisation for Economic Co-operation and Development).

Aimed at realizing a “New future for Tohoku and Japan” going beyond reconstruction of the disaster-ravaged areas, the objective of this project is to develop human resources who will generate the industries and innovation that are needed for the economic vitalization of Tohoku.

TOYO SYSTEM has also been active in supporting the dreams of children who will drive the future and, as an enterprise engaged in the manufacturing sector, we have staged an event to test drive the Lexus LFA super car, which represents the pinnacle of monozukuri, and of which there are only 500 in the world, as an initiative for conveying the importance of manufacturing to children.

We organized a booth this time as one of the supporting companies that shares the same ideals. The event venue featured large-sized balloons to express the height of the tsunami waves; a panel titled “100 Stories” was displayed showing stories of students’ past, present and thier expectations about future lives; and the TOYO SYSTEM booth introducing the LFA test driving event attracted many people too.

TOYO SYSTEM will continue to support such activities in the hope that children will utilize these experiences and become human resources who can together join with us in working for the future recovery of this area. 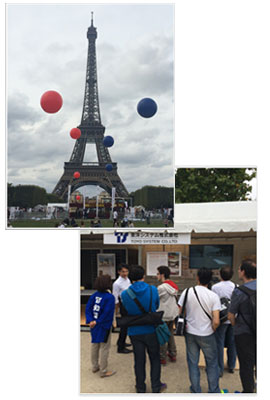