Staging of a Lecture by Tatsuhiko Kodama

In light of the fact that many citizens of Iwaki are concerned over the issue of radiation following the accident at Fukushima Daiichi Nuclear Power Plant that was triggered by the Great East Japan Earthquake, we staged a lecture entitled, “Protecting people from damage caused by radiation (tentative)” by Tatsuhiko Kodama at Onahama Ocean Hotel on Saturday, December 3, 2011 with a view to alleviating concerns and providing useful information for future life.

Staging of a Lecture by Tatsuhiko Kodama: Mr. Kodama, a Doctor of Medicine, is Director of the Isotope Science Center, University of Tokyo and an authority in the radiation field, and he has also given a speech at the National Diet.

The lecture meeting attracted more than 600 participants (above capacity), and many questions were put to Mr. Kodama following his talk, demonstrating the high level of public interest in this matter.

We sincerely hope and pray for the return to an environment in which small children who will drive the future can live healthy lives. 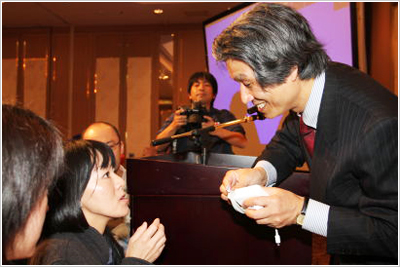