“Iwaki Battery Valley Festival 2016 ~ Let’s Play with the Future~” was held over two days on September 17 and 18, 2016 at Alios Iwaki Performing Center and Hiranaka Central Park.
The event was attended by more than 18,000 members of the general public.
Based around the concept of, “See, Touch, Hear, and Make”, numerous companies cooperated in allowing participants to experience state-of-the-art energy technologies through making fuel-cell vehicles, test driving very small electric mobility devices and so on.
Iwaki City aims to become a leading city of battery utilization, and TOYO SYSTEM will continue to offer backup for activities aimed at advancing the further concentration of energy storage battery-related industries in the city from now on. 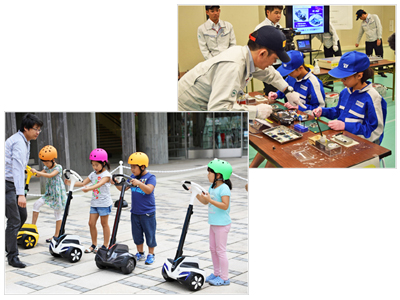